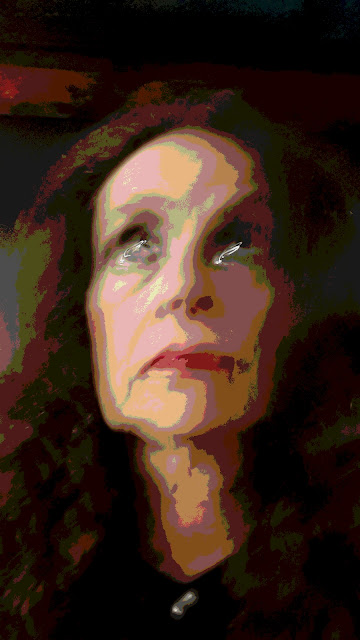 As a result of what I do, since July 25, 1990 at 9:45 PM CST, People  across the Globe have flourished (economically, financially and personally) with the Celebration of the most creative Events (retermed as HOLIDATES) that have changed the (sometimes lackluster, mundane,  stagnant and boring) Course of their Life; given them Careers; solidified Goals, while entertaining, educating, feeding their Spirit(s) through goodwill, humanitarian, altruistic, recreational, patriotic, good time and fun time Events, often leading them out of their ruts, their Addictions/Afflictions and their Low Points to a much happier Place within themselves and their Communities.

with its 2,500 HOLIDATES in 35 different Categories will continue to color the World, as a Brand;  as The Institute of Eventology and as a Positive Mindset. 2020 marks my 30TH Year Anniversary of being hailed as:

‘The De Facto Architect of Holidays: Adrienne Sioux Koopersmith’ a title I received from Colton A. Kruse  of Ripleys Believe It or Not! (2017)

WHAT’s IN IT FOR ME? If you work for a major Corporation who identifies with my Philosophy of Positivity, who appreciates how I created ‘THE CONTENT’ comprised of high Doses of Imagination & Creativity performed non-stop, on a Daily Basis and if you possess the Future Insight to know that those combined Elements drive the Betterment of 21st Century Life, then I  personally invite you to see The Difference a Day makes via what I have diligently  set forth with this  immense Body of original Words + Works in the Literary Genre known, promoted, distributed  and advanced as #Eventology since 1990.  With nearly 30 years ago of sharing The Good Times under my Belt since July 25, 1990, let’s let MORE of those GOOD TIMES roll. Collaborate?

WHO DO YOU KNOW?

Posted by Adrienne Sioux Koopersmith at 12:47 PM No comments:

Unplugged. Unleashed. Unveiling CALi The CALico’s Rendition of Valentine’s Day called: CALientine Day. Man your Knitting Needles, you’ve got some serious Stitching ahead. How CATS should be respectfully honored during CALi’s Calendar declaring 2019-2029 as: The Decade of The CAT ~ FELiNE ©1997 ©2018. #CALientine_Day voted as the #1 Empathy – EmPEThetic Holidate created since PAW: Pet Appreciation Week ©1994. 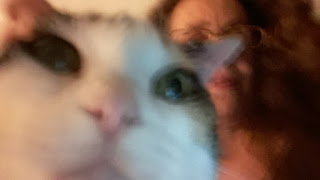 The Universally-acclaimed SuPURR Species of all Time:
My CAT.  CALi The CALico
Chicago, Illinois USA

WHY THIS IS SO:

And, it will be COLD outside for several more Months to come over here in The Northern Hemisphere.

However, it is neat to know that People like to KNiT. Purl & Crochet.  It is a most popular Past Time that passes The TiME away.  At The End, you may have a very nice Product (#PURR_oduct in Fluent CAT), if you chose to construct something creative.  That Suggestion is recommended and even encouraged in Times like this.

BESiDES:  With The Aging of America, some 10,000 of us Westerners turn 65 (years old) every Day whether our Government is open or closed for Business. This Statistic will run through 2029; therefore, what’s better to do than to relax and knit something special.  Something special that is durable & sturdy  that can be directed to our Beloved Pets, who I call our PET BUDDiES.

WITH ALL THAT iN MiND:
HOOT:  Head-On-Over-To your local KNiT Shop and scoop-up some Yarn.  CALI’s favorite Yarn that I have needlepointed and knitted with from 1974-1979 when I was in my: 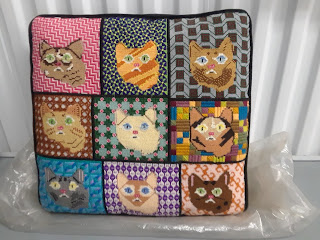 is Paternayan. It’s The Quality & Variety of Threaded Yarn in which I placed Third in ‘Best of Show’ in the New York City Paternayan National Yarn Contest in 1977, 41.5 years ago (as of January, 2019) for my Depiction of my 9 Lives multi-colored Pillow that measured 16 X 16 inches.  To this Day, The Colors of those Yarns are still as vibrant as they were when I initially stitched it.  I guess CATS & Creativity (C_re_AT_ivity) have been part of My LiFE.  I could not be in better Company or know of a Company that produces such a Quality Product, now over 100 years old.  That, of course, is Lasting Power and Customer Satisfaction throughout The Decades.  Of interest to know, note and reflect on is that during that Five (5) Year Period, I only needlepointed Pillows whose Themes were CATS. 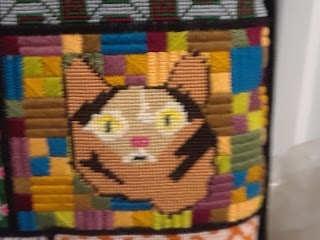 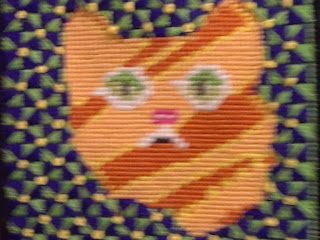 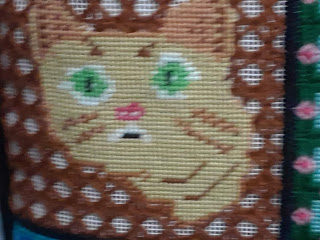 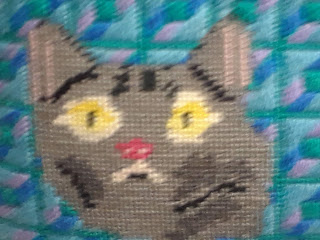 While shop-side, buy-up a few Balls – Skeins – Hanks galore.  Since it’s abominably cold outside (only fit for a robust Snowman or Polar Bears & Penguins) in so many Sectors of Our World, added Insulation is needed for our Dear Pets, especially those who are walked every Day.  Namely: DOGS - Canine.

Most of you know me as THE CAT-WOMAN who takes her CAT, #Cali_The-CALiCO outside daily on a Leash; who walks down 6 Flights of Steps (some 84 in number) til We get to our Lobby…  We call that Stairwelling.  #Stairwelling.  An excellent Exercise since Gravity is working in our Favor.

Well, We don’t go outdoors in The Stills of a blustery Chicago Winter that can last 6 Months (from NovemBURR to April), but We are quite The #CAThletes, #CATXercising as much as We PAWSsibly can.

After you’ve shopped, go home and KNiT a COAT/JACKET for a DOG and a CAT Blanket.  Invite some Friends over to also participate in The Project, that may fastly #CAT_ch on as your #Pet_Project.  Upon completion, take those finished COATS/JACKETS/BLANKETS over to your local Shelter – at which time, they can:

1-raffle those off later for a Fundraiser;
2-use them to The PETS temporarily staying there; and/or
3-give them as ‘Welcome Home Gifts’ for DOGS & CATS who are adopted.

What’s kinder and cooler than that sweet and warm Gesture? Nothing that CALi & I can think of.  And, We are constantly thinking of more HOLIDATES to place into her CAT CALENDAR marking:

Known as the “Undisputed Champ of Holiday Creation” by Doug Criss of CNN (in February of 2018), I’m the World’s Foremost Creator of more than 2,500 HOLiDATES in 35 Categories. That feature is online at:

CALi’s 366 CAT elated and related EVENTS are indeed my proudest because of my intense Love for her and how these HOLiDATES can positively affect the LiVES of CATS & all other Creatures here that We share our Earthly home with.

But HURRY, as this Project is in Celebration of THE FiRST

that runs on and is simultaneously at the same TiME of Valentine’s Day.

Doesn’t get any better than that…

þ CAT Lovers will appreciate this.

þ Recipients of the JACKET/COAT/BLANKET Ensemble will be thrilled.

The only Differences is that there are NO Calories attached to this #HOLIDATE and it aptly serves as 1 of CALi’s 24 Humanitarian Campaigns in which She corrects The Wrongs & Misbehaviors of The World of which there are many.  Plus, no Teeth will rot out from the Ingestion of Sugar.  No Weight Gain due to Over-Consumption. This HOLiDATE is purely from The Heart.   #HeartSmart is what We call it here at: 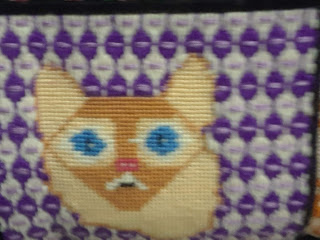 YOUR ASSIGNMENT:
For those participating, by all means send PHOTOGRAPHS & VIDEOS to ME, CALi’s Human at:

And your Photo will be used in: CALi’s CALENDAR during her:

For any QOQ: Questions Or Queries or to set up an Interview, email us at:

To set up a TiME to #CHAT_CAT. 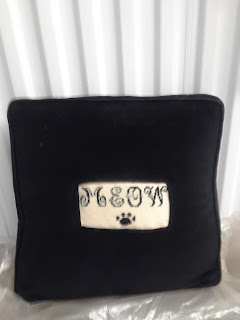 The I’s and i’s that are cast in YELLOW HiGHLiGHTER symbolize a Candle of Hope; a Spark of LiFE placed into Words that are to make Readers think outside The Blog.

CALI’s HOLiDATES are for SALE.  It is preferred that We work with an established CAT Industry Corporation seeing the great Potential in this Collection of 366 all-original CAT elated/related EVENTS, never released before.  For Usage from 2019 to 2029, an Exclusive will be given.  CALi & I command the EVENTOLOGY Department of that Firm from our HOME here in Chicago, the Third largest & most cosmopolitan/metropolitan City in the USA.

THE GREATEST OPPURRTUNiTY IN THE PET INDUSTRY FOR THE 21ST CENTURY:
Opening Bids begin at $10,000,000 per year. These EVENTS are The #SuPURR_BOWL of CATdom. 2020 marks the Thirtieth (30TH) Year since My Ingenious Creation & Launch of:

No other Person has such a Cache of original Creative Content.  Separate yourself from the comPETition; entertain your Customers & Patrons 1-2-3 or more CAT  EVENTS @ a TiME.

Posted by Adrienne Sioux Koopersmith at 8:25 AM No comments: